Day 8 started with a certain amount of trepidation as it dawned on Clive (Fi’s Dad), James (Abbie’s husband) and Alex (Abbie’s brother in law) that they’d opted into one of the longest and hilliest legs of LEJOG – which, it now transpired, would almost certainly also be the coldest and the wettest. Nonetheless, we all got off to a cheery start, looking to the delights of the Lake District (great cows and scenery) to distract us from the bigger issues at play – large looming grey clouds and steep hills in every direction. 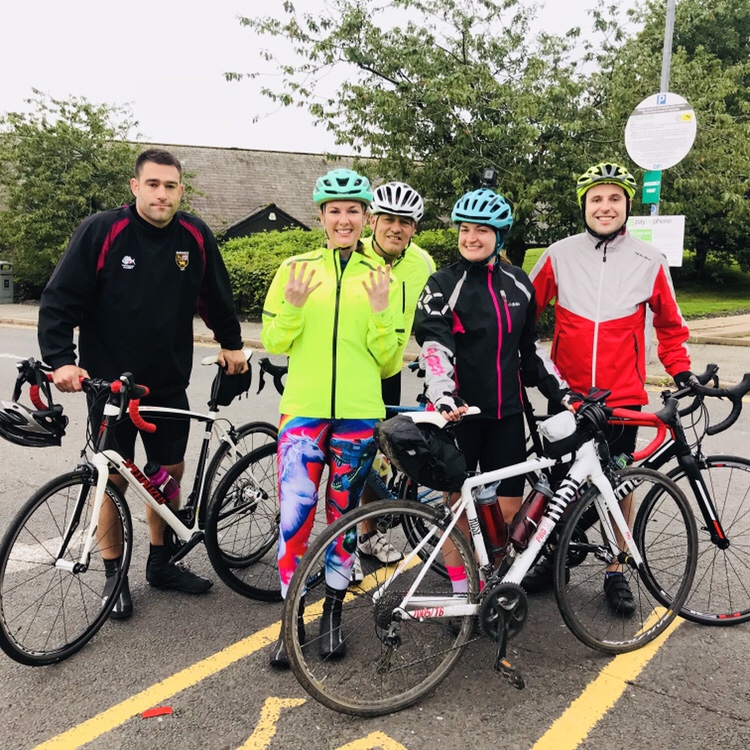 Most of the apprehension leading into day 8 was regarding Shap Fell – which Routemaster Roy had warned us would be the most challenging climb on his LEJOG route. And we would love to be able to tell you just how bad Shap Fell turned out to be, but Abbie’s navigation had other ideas and we inadvertently ended up missing the notable climb. We did, however, find a way to make up for it by heading south east for some time (we are aware that’s not the right direction for John O Groats) and racking up about 1000ft of climbing during the first 20 miles of the day – no small feat.

As we emerged from the Lakes the bearable light drizzle turned into a steady stream of water from above. Pitching up at an M&S foodhall in Penrith it took no time at all for us to admit to one another that no one was having too much fun. There was no giving up, but we did take the opportunity to add all spare layers going from Lisa’s car whilst guzzling coffee and bacon sandwiches, and put in various requests for extra kit should Lisa pass a cycling shop. Not long after getting pack on the road we were showered with some of Halfords finest chilly weather gear – leg warmers, thermal caps, dry socks and waterproof shoe covers – it was a God send, and we genuinely aren’t too sure we could have got through the rest of the day hypothermia-free without it. On top of the rain it was a mere ten degrees, and incredible difficult to keep warm. At one point Sally had to dive into some public loos to get out of the wind and try and regain some feeling into her numb hands (handy for braking, no pun intended) and Abbie had to hand out electrolytes, hot drinks and snacks to the shivering boys in the entrance of Sainsbury’s Carlisle. It’s fair to say that day 8 had all the glamour of a trip to the dump. And seemed to last roughly 2000 times as long.

Despite the gloom, there was a shining light on the horizon, and not just the flashing red light on the back of James’ cycling jacket which he neither had any idea was there nor has any idea how to control. We were nearing the Scottish border, and the further north we travelled the more the weather seemed to incrementally improve. By the time we reached the “Welcome to Scotland” sign there was a giddy sense of achievement in the air. Not only had two of us cycled the length of England, but the remaining three had cycled their furthest distances ever by rather a long way, and in some incredibly challenging conditions. On the high of crossing the border and quite a lot of sugar (or beef jerky if you’re Alex) Lockerbie was finally in our sights. Arriving to a big welcome party of The Haggans, Meg the dog and Lisa and Kev (wearing less than they were when they’d started the day) was the icing on the cake. There’s no doubt that our day 8 ringers could not have picked a more challenging leg to join us for, but they can all be very, very proud of themselves for nailing an incredibly tough day. We loved having them there. 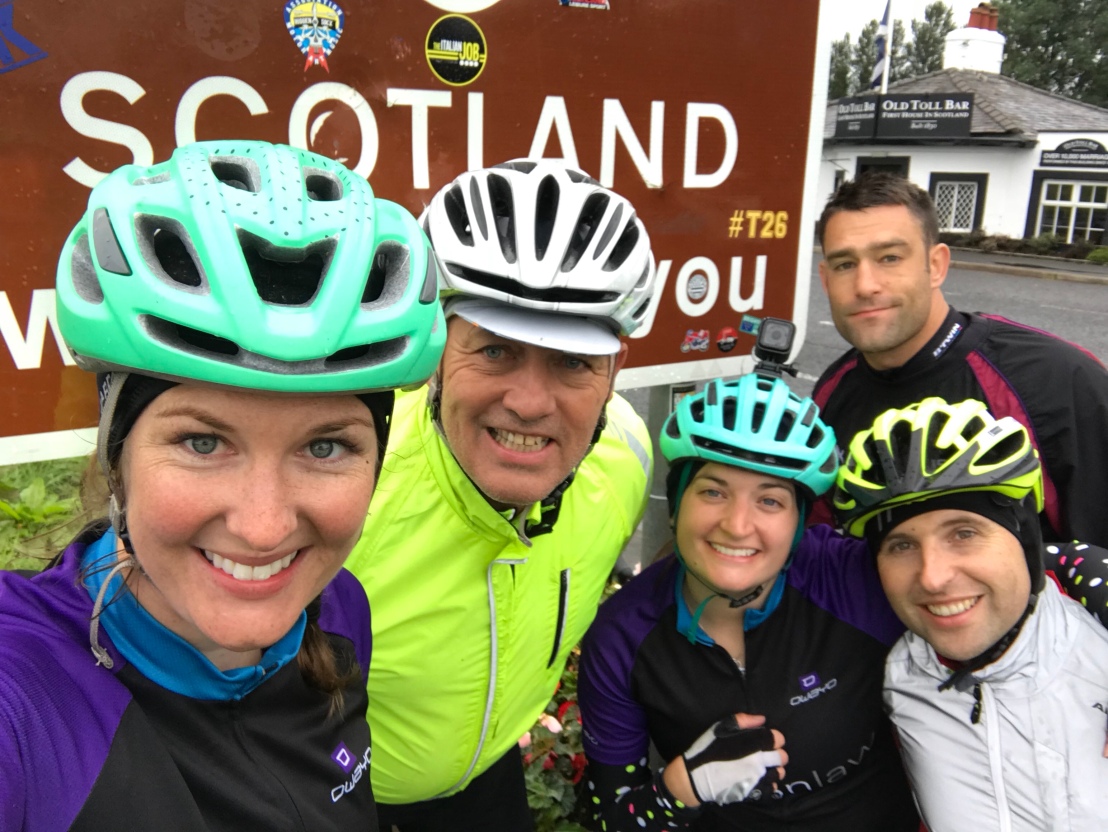 Day 9 was a walk in the park in comparison. Despite a 30mile ish hill to tackle in the rain in the cycle lane of Scotland’s bleakest B roads to start things off, things improved when we met up with one of Sally’s fellow Altura riders, Iain, who is local to the area and led us on our quickest LEJOG segment through some stunning scenery on the road to Edinburgh. Views aside, it also has to be mentioned that the stretches from both Penrith to Carlisle and then Abington to Newbridge have some of the smoothest, bounciest and generally heaven-like tarmac in the UK – and, the last week or so considered, we think we have authority on this point. Thank you tarmac Gods (and Iain).

Arriving at the Newbridge Premier Inn on the edge of Edinburgh we were greeted by James and his parents Hazel and Jim (not forgetting Meg the dog) and a few comments were made along the lines of us perhaps not looking quite as wiped-out on previous days. Are we acclimatising? Was it a fluke? Time will tell. Shortly afterwards we were joined by Al (Fi’s boyfriend) who joined us for dinner, and Hazel, Jim and Meg were on their way to tomorrow’s destination (Pitlochry) instead of back to Guildford as planned – succumbing to the fate of many a LEJOG support crew member and struggling to depart the LEJOG dream.

Still in search of a deep fried mars bar,